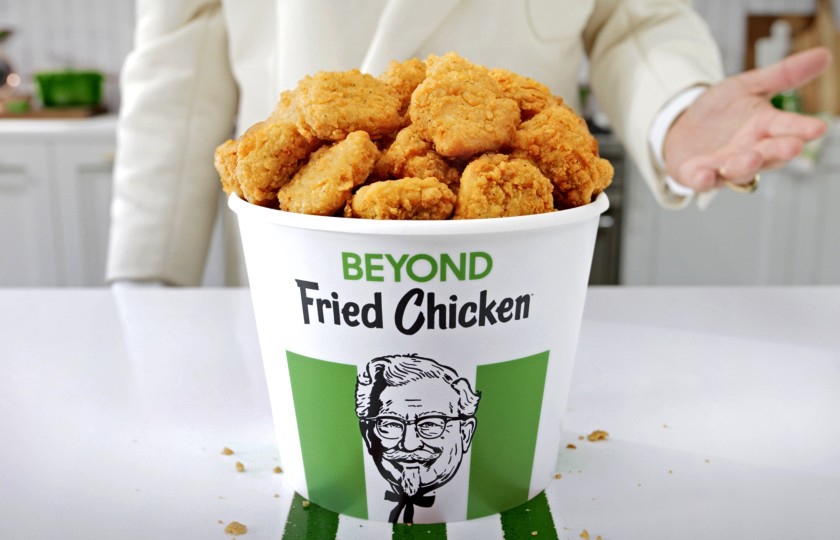 Every chicken has his day !

KFC’s efforts to make fried chicken nuggets, crispy on the outside and juicy on the inside, are likely to eliminate the need for broilers to die in the future.

KFC said it was part of its approach to the innovative idea of “Restaurant of The Future” .With the rising awareness of food nutrition, healthy lifestyles, and environmental protection,more people are beginning to pursue alternative meats.So they hope to “design meat of the future”, creating more environmentally friendly meats,which taste and look alike fried chicken nuggets.

The forefront of 3D bio-printing has actually been in the medical field. It can print various body tissues and even organs through bio-ink. But now it is moving beyond medical use, and is being used by companies to produce food.

3D bio-printing technologies,originally used in medicine,are becoming more popular in food production such as meat, according to the founder of 3D Bioprinting Solutions.

However, consumers should not expect to eat “printed fried chicken nuggets” any time soon. The collaboration is still experimental and costs have not been disclosed, but the biggest issue since the idea of growing meat has been the cost of producing it. Israeli start-up Aleph Farms, for example, has claimed that a pound of hamburger steak still costs as much as $100.

Cultured meat has less impact on the environment and has been seen as one of the meat options of the future. Cultured meat uses only half as much energy as conventional meat;reduces greenhouse gases by 96 percent and saves 99 percent of the land used to produce meat.

KFC points out that 3D printed meat is not only good for the environment, but also tastes like real meat and is healthier for consumers while avoiding any drugs or additives used in agriculture and livestock farming.

According to KFC, the 3D printed nuggets will be tested in Moscow in Fall, but the launch date has not been announced.

The plant-based fried chicken was well received and KFC decided to sell it in its 50 outlets.

KFC’s investment in the future of meat is plant-based meat.

In addition to 3D bio-printed chicken nuggets, KFC partnered with plant meat company– Beyond Meat to launch “Beyond Fried Chicken” in August 2019.

The new “fried chicken”, which sold out in less than five hours during its debut in Atlanta, US, was widely praised.

At the time, KFC’s marketing director was confident that consumers would find it difficult to discover that the chicken nuggets were plant-based meat, and when they tasted them, they would exclaim, “It tastes just like KFC chicken!”

“Beyond Chicken” is also popular among consumers, and following its success in Atlanta, KFC recently announced that it will expand “Beyond Artificial Meat” to 50 U.S. cities, including Los Angeles.

Do you ever wonder what 3D printed meats would taste/look like? Would you like to try some?

What is Layer Shifting and How to Fix it ?

How to max out your 3D printer’s lifespan