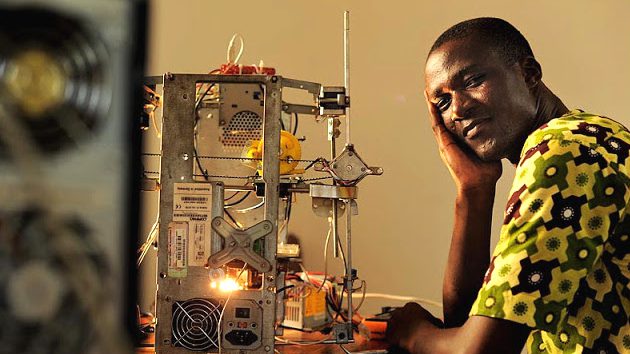 Creating 3D Printers from E-Waste? A lab in Africa is doing just that!

It’s no surprise that electronic waste is a major crisis in Africa. From broken computers and phones to TVs and all sorts of household appliances, the e-waste dump only seems to be growing by the day. And what’s worse is the burning of these wastes produce toxic and unhealthy fumes that affect the surrounding areas. Luckily there are many individuals working together to help curb the rising problem as well as raise awareness and get more people involved.

Others, however, are looking for ways to put the e-waste to another use. One of them is WoeLab in West Africa who have created the first “Made in Africa” 3D Printer from e-waste!

Using parts of scrap printers, computers, and scanners, they built the 3D printer from scratch!

WoeLab, based in Lomé, the capital city of Togo in West Africa is an innovative and community tech hub established by  Sénamé Koffi Agbodjinou.

The idea was born when Agbodjinou purchased a 3D printer for the lab. Upon seeing this, the young innovators based at the workshop decided to build their own. They wanted to see if it was possible to build a new one but with their own resources.

By launching a crowdfunding campaign, they raised a total of over $4,000 and consequently utilized e-waste components from computers, scanners, and other electronic devices to produce the W.Afate 3D printer

In a nutshell, WoeLab is a grassroots network of inventors and entrepreneurs who want to build a “digital democracy.” For them, this starts with the 3D printer.

The 3D printer may have been a huge breakthrough for WoeLab but it doesn’t stop there. As a part of a much broader and bold ambition- it plans to make Africa a tech-centered continent.

“The idea is that the African city of tomorrow will be built by our own innovation spaces,” Agbodjinou explains.

The machine that was created took a whole year and required a lot of collaborative work. The team used old printers, computers, and scanners and based their design on the RepRap low-cost 3D printing model, first designed by experts at the University of Bath. It’s capable of printing plastic objects within a size of 50cm cubed!

An inspiration to the entire continent

WoeLabs opened in 2012 and by 2013 they produced the first 3D printer. Today they have 20 finished products and other labs in Africa are following suit.

They plan to place a 3D printer in every school within one km of the lab to encourage technological learning.”What we are concerned with is to try to create in the young people a confidence in themselves in their capacity to realize projects,” Agbodjinou says.

WoeLab’s 3D printer may have been the first one in Africa made from e-waste but they have inspired incubation hubs all across the continent who are looking to this new technology. Even students at Buni Hub, a mini fabrication lab in Tanzania, have similarly created a 3D printer using waste electronics.

3D printing is also being used to make prosthetic limbs in Africa, like in Sudan, where the organization Not Impossible are helping amputees.

“We want to bring these technologies to Africa, and see how Africans can develop and understand them in an effort to create African possibilities,” Agbodjinou says. Since the electronic waste in Ghana makes it one of the world’s largest digital dumps, the initiative taken by WoeLab has not only made a mark in the field of 3D printing but a mark worldwide. It shows us how action taken at even the smallest community-driven level has enough potential to make a big impact.

WoeLab locally sources their e-waste from all across Togo’s capital, particularly from one of their partnering groups, the Action Sociale pour Le Developpement Integral (ASDI) recycling centre.

With about 50 people working in the space, and a second lab opened in Lomé earlier this year, WoeLab is gradually growing. There are 10 startups based in WoeLab pursuing projects ranging from building robots to tackling waste. It proves that we can reduce the amount of dangerous waste and convert it into materials for “low high tech” which Agbodjinou refers to as using recycled materials to provide new sources of income for Africans with limited access to technology.

In a country where about almost half of the inhabitants live in poverty, offering access to emerging and self-sustainable technologies will help improve their livelihood and standard of living.

Run through your amazing ideas and make the best creative 3D Printable for the upcoming Global 3D Printing Day.

Troubleshooting: Tips To Help You Remove Your 3D Prints From The Bed